KIRKUK, A DAY AFTER IRAQ TOOK IT BACK

...scroll down for pictures...

Having vowed to defend the city of Kirkuk to the death, the Kurdish Peshmerga lost it in less than a day. Without a real fight. Reports of gun battles on street corners and minor skirmishes came in thick and fast. Then mere hours later news that shocked the Kurdish people to the core filtered through, that the Peshmerga had retreated in a humiliating rush for the hills.

"The PUK abandoned us, they betrayed us" - is a common refrain among KDP fighters. The PUK (Patriotic union of Kurdistan) and the KDP (Democratic Party of Kurdistan) command the military forces of the autonomous region of Kurdistan - both pledge allegiance to the KRG (Kurdistan Regional Government), lead by Massoud Barzani.

The Iraqi forces together with the Hashd al Shaabi, an Iranian backed militia group, moved to take Kirkuk back from the Kurds by force, following an ultimatum from Iraqi Prime Minister, Haider al-Abadi to hand the city over peacefully. The Kurdish Peshmerga have occupied the area since they moved in to defend it from Daesh in 2014. What the KDP soldiers are referring to is the sudden retreat of PUK fighters from the Kirkuk frontline on Monday, apparently following a command from the top. The KDP say they were unable to hold the line in the ensuing confusion and joined the retreat out beyond the city limits. This left the city free for the Iraqi Army and the Hashd al Shaabi to walk in and mop up the leaderless Kurdish volunteer fighters who had traveled in from all over Kurdistan to defend the city. Whoever gave the order to the PUK, why ever they gave it, whether or not it was a deal with Iran decided in advance, this was a humiliating rout that has crushed the resolve of the Kurds and lead to an increase in the bitterness and infighting that left them open to such self-destructive division in the first place.

"We were sold to Iran. Talabani sold us to the Hashd. Why did the international community betray us? Why didn't they help us? When the Iraqi Army ran and left their weapons for Daesh, we defended the land. And now everyone has betrayed us" said a dejected Colonel Majd of the PDK's elite Zerevani battalion, from a mat on the desert floor, on the Kirkuk Road near Sherawa. His battalion along with others are currently working on creating frontline defences, "We'll wait for orders and then follow the command. We won't move back from here, this is our land, we won't let them take it from us. We want to settle this in peace, but we will fight if we have to" he explains.

Meanwhile within Kirkuk City, jubilant Iraqi forces and Hashd al Shaabi patrol the streets waving flags and RPGs. Division Commander Nuri Danaw beams from the passenger seat of a 4wd, "We're happy now. We have eliminated racism and got rid of Barzani. People were being terrorised by the Peshmerga and Barzani is like Saddam. When the British got rid of Saddam, they gave us another Saddam - Massoud Barzani. But he got too comfortable, that is why this is happening. Now we can live peacefully with no problems between Daesh, Turkman, Arab and Kurd"

Nearby a group of children stand in the street at the Qoria roundabout, carrying the distinctive pale blue Turkman flag adorned with sickle and stars and the plain black flag of the Shia. 28 year old Jihad Khalid climbs atop a billboard to secure their flags in place of Kurdish flags that have been removed, "The Kurds treated us so badly, ever since they've been here they would come at night and abuse us. Since last night we can live in peace, we will have better lives now" he says with a smile. A UN worker named Danny chips in as he passes, "Yesterday people were on the streets with flags, shooting, but now the Iraqi Army say anyone shooting on the street will go straight to jail, so today it's calm" The overall atmosphere is indeed calm. Aside from the Kurdish quarter of the city, which is deserted, shops are open and people are going about their business. The calm is punctuated occasionally by Iraqi and Hashd military convoys driving through, bristling with automatic weapons, RPGs and sniper rifles, horns blaring.

Among the ultimatum demands of Iraq, was the K1 Military Base just outside Kirkuk City. Previously occupied by the Peshmerga, the place looks long deserted, derelict buildings squat in the dusty landscape and feral dogs roam. It's clear the Pesmerga left in a hurry the day before, a bunch of keys lies in the dust by the front door of a building now occupied by Iraqi Special Forces medics, sandals sit next to many of the beds inside, a half drunk bottle of coke and a lone onion lie abandoned on the floor. Major Samer is in charge, his congenial grin infectious, his take on the situation pragmatic, "I have no problem with the Kurdish, I have no problem with Kurdistan. We are all Iraqi. I have a problem with Barzani" He relates how his unit had three Peshmerga prisoners the day before, "One was injured. I sent him to the hospital and told the other two to go home. I called them yesterday evening to make sure that they got back to their families. It's a dangerous time, but they are safe now" 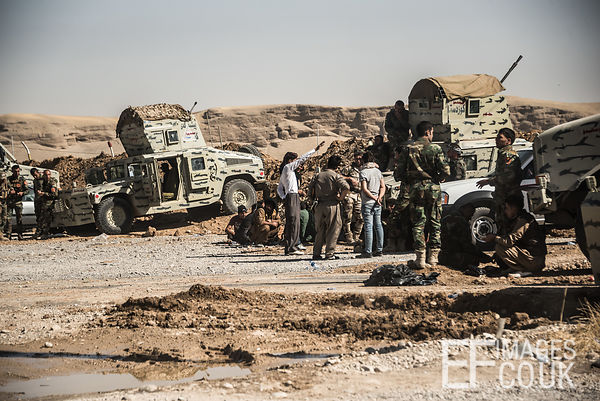 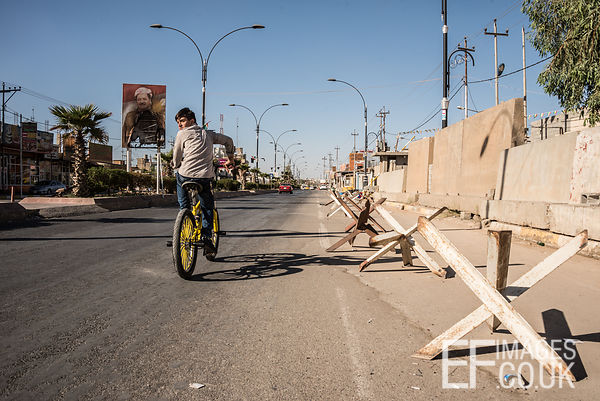 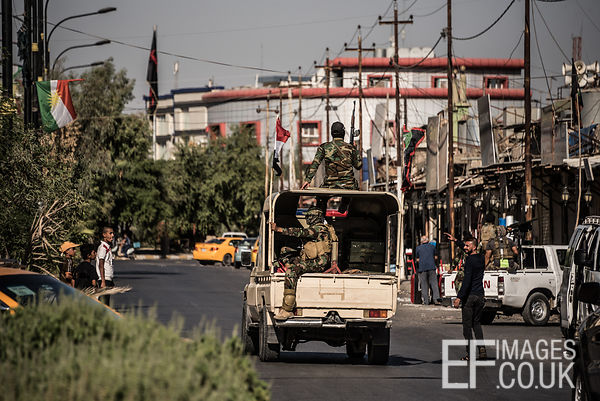 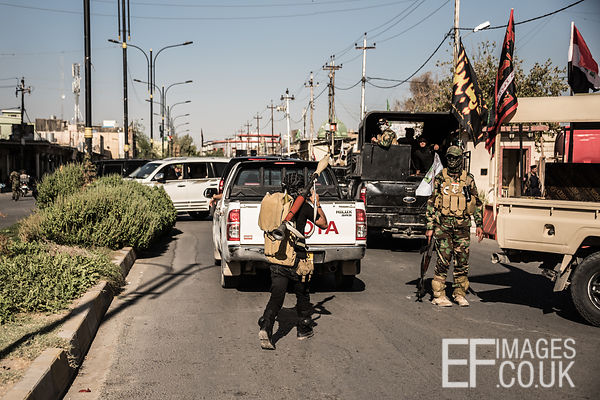 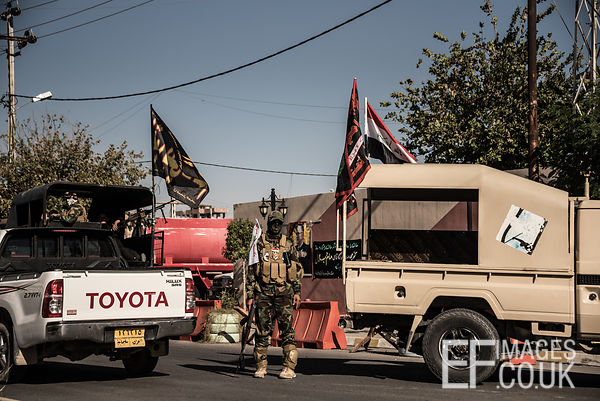 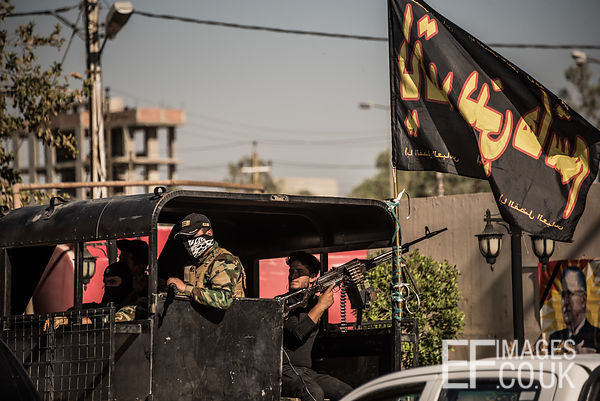 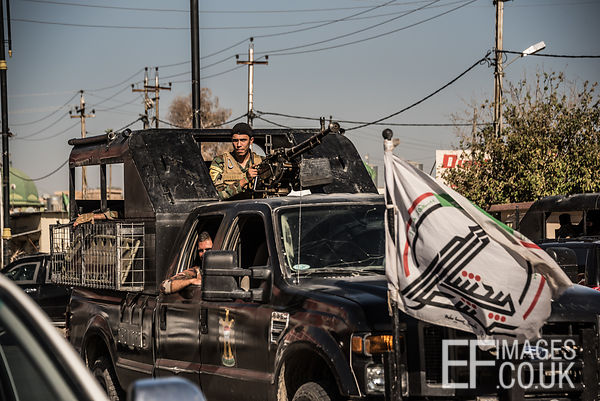 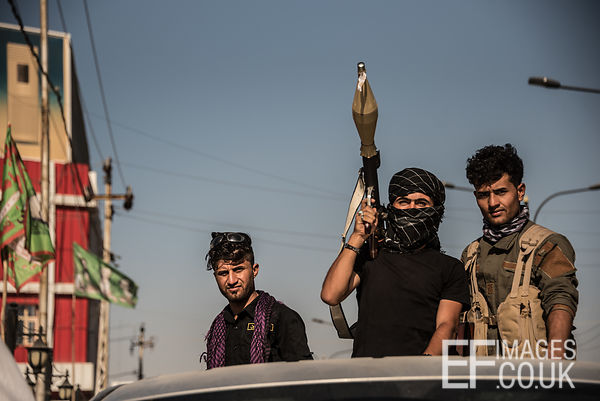 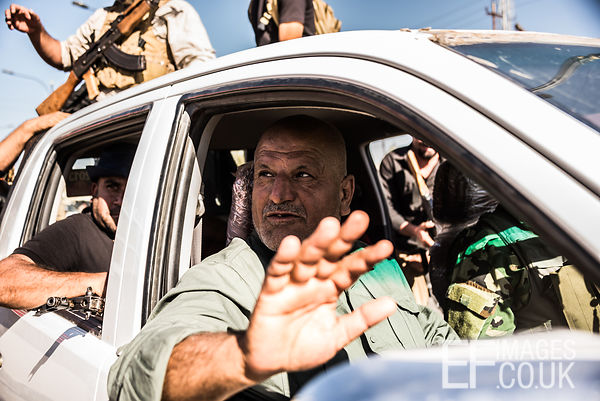 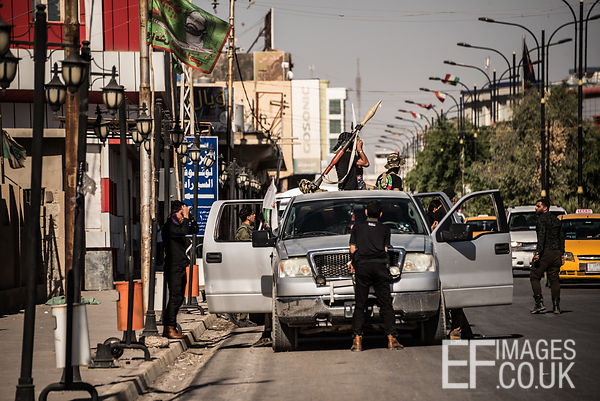 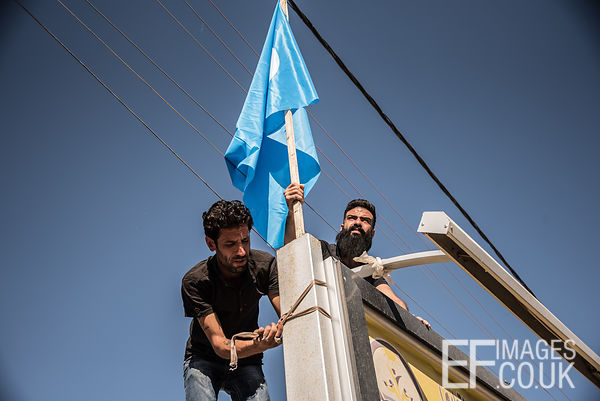 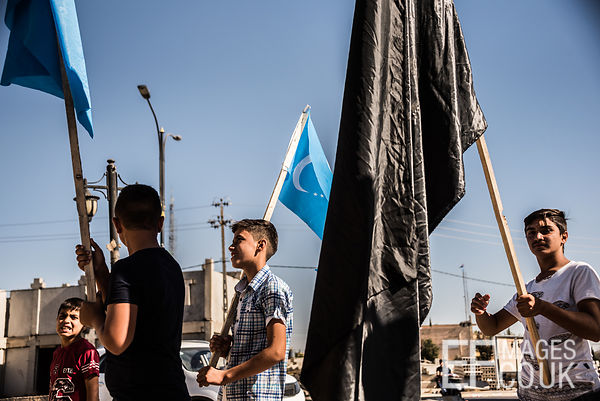