This is Hamam al-Alil IDP (Internally Displaced Persons) Camp just south of Mosul. Up to twelve thousand people a day end up here, having escaped ISIS held areas of West Mosul, with most having to be transported or make their own way to other camps since this one became full weeks ago. Many decide to go it alone and find some way to live outside the camp - up to 500 families have chosen to remain in the area living rough rather than be transported, according to Tripoli born NRC Area Manager Ahmad Azzan.

Having spent more than two and a half years living in Mosul under ISIS, most of the people here have quite literally run from their homes with only what they could carry, if anything at all. Many don't even have shoes, or have completely inappropriately sized shoes because they lost their own during their escape. Stories of no services or food in West Mosul are common. As are tales of airstrikes, with many families finally making a break for it because their home has been hit, either directly or by the blast from a hit to a neighbour's place.

Isra Abdelrazar, a 31 year old mother of five from a neighbourhood in West Mosul, reached Hamam al-Alil Camp two days previously and has not been able to get camp accommodation. She described how finally it was the lack of food and the smell from the corpses of her neighbours, rotting under the rubble of their airstrike destroyed home, which prompted her family to decide to leave. They waited in their house for a chance to get past the ISIS Sniper positioned on a roof across the road. And when he was taken out by an airstrike, they ran for it. She and her family are unimpressed by the lack of aid that they've received from the camp, but they all agree that it's far better than where they've come from.

46 year old Shakir Mohammed and his family of thirteen arrived at Hamam al-Alil six days previously. They are sharing a 3mx4m tent with two other families. Twenty two people in total cram into this small space to sleep every night. The Children range in age from four months to seventeen years. One seven month old baby girl is dehydrated and suffering from a chest infection (likely the one that Dr Karim, 28, notes is sweeping the camp in an epidemic). The other children seem healthy and full of smiles and laughter, there are shrieks of, "selfie selfie!" The floor of the tent is mud. Damp mud. Damp mud that smells exactly like the mud at Reading festival on Day 3. It is three quarters covered with a woven mat, but this is not waterproof and cold wet can be felt seeping through. There are six small, single, foam mattresses and no sign of any blankets. It still gets down to around three degrees celcius at night here. Lunch is being cooked - dolma - rice, chicken (canned in this case) and tomato stuffed vegetables. It looks sufficient for about five people, but has to be enough for twenty two. And still the family repeatedly offer to share. There is no running water nearby and the water they have been given for cooking and washing amounts to a few discoloured liters. They too say they are glad to be here because it is still much better than Mosul.

There is a fenced off area within the camp's Transit Zone. It is filled with rows of mostly bearded men sitting cross legged on the floor, soldiers with automatic weapons, important looking Generals with gold braid and small boys with tea urns. The men look tired and restless. They have arrived in the camp from Mosul earlier in the day and are now undergoing the Second Security Check. This means their details are being checked against a system containing information from civilian spies in Mosul who have accused members of their community of affiliations with ISIS. Should two or more spies turn out to have accused the same man of being ISIS, he will be held in a room here for questioning and if there is any doubt at all that he is innocent he will then be sent to the Intelligence Office in Mosul and from there to Baghdad to be tried. So far today, three ISIS suspects have been caught. One is smartly dressed in a three piece suit, his well groomed hair and beard put one more in mind of a member of the gentlemen's club, Mr Erbil, than a psychotic terrorist. He looks tense, annoyed and slightly confused by his situation. Chief of Intelligence, Colonel Hassnien Ryadh waves him away, stating that it does indeed look somewhat unlikely that he is Daesh.

Next up is a child. Ryadh hastens to point out that, if he is ISIS, the atrocities this child is capable of should not be dismissed purely on account of his tender years. His name is Hamza, he is 15. He stares defiantly at everyone, his many zipped skinny jeans crossed at the ankle, his hoodie clad shoulders relaxed. His story is that he was only with ISIS for five days and that they forced him to be a member.

Apparently they like their tea very very sweet. Elaborating on his tale, Hamza explains that he used to sell cigarettes, which is illegal under ISIS, all forms of smoking are. So ISIS caught him and tried to force him to take them to his supplier, presumably so that they could punish the man appropriately for the misdemeanor of facilitating smoking. Hamza claims that he did not take them to anyone and then they made him make tea for them, but only for one hour every day. On the last day he told them he was going home, but really he ran away from Mosul with his family. He doesn't break eye contact once he has it and occasionally appears to be exchanging banter with Ryadh, who looks on him with a sort of benign tolerance and occasionally pats his knee.

He says he doesn't know where his family is now because they separated while running through areas under ISIS attack to have a better chance of getting out of Mosul alive. Hamza says he feels good about his current situation,

"It is better than being with ISIS" he confirms.

Once Hamza has gone, Colonel Ryadh explains that two spies have accused him of being a member of ISIS and claim that he was manning checkpoints, transporting AK47s and helping to force civilians out of their homes so that ISIS could use the buildings.

One thing is clear, an unfinished, crammed to bursting IDP camp, struggling to meet the most basic needs is preferable to all over the experience they have had in their home town - even those who have clung on to what is left of their lives until this close to the bitter end. 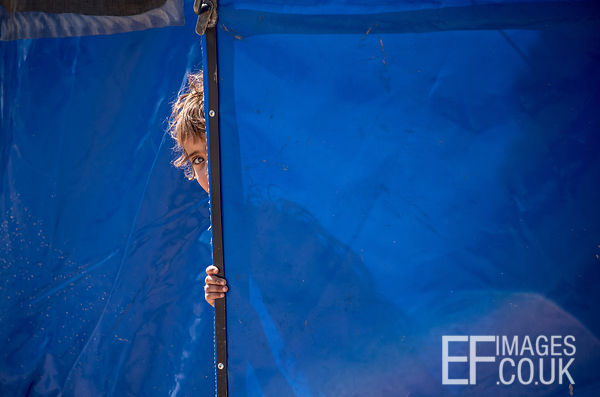 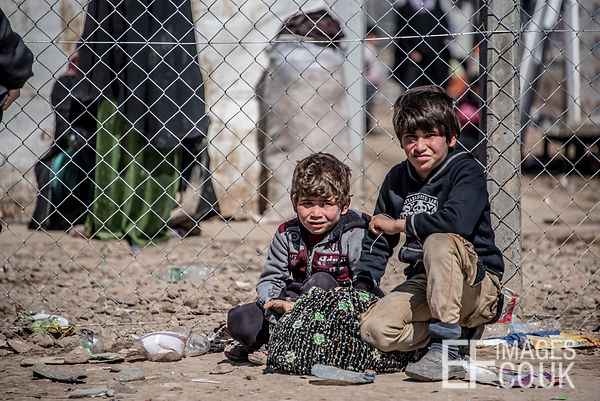 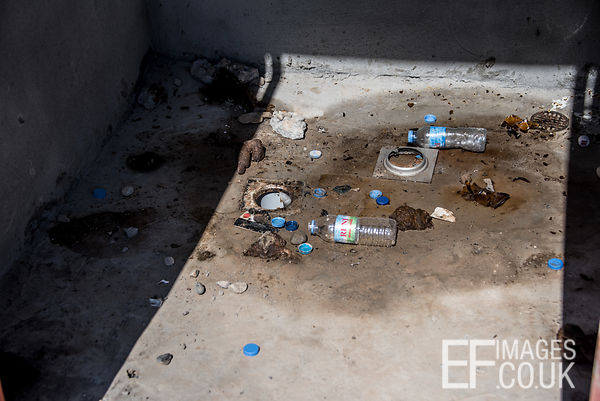 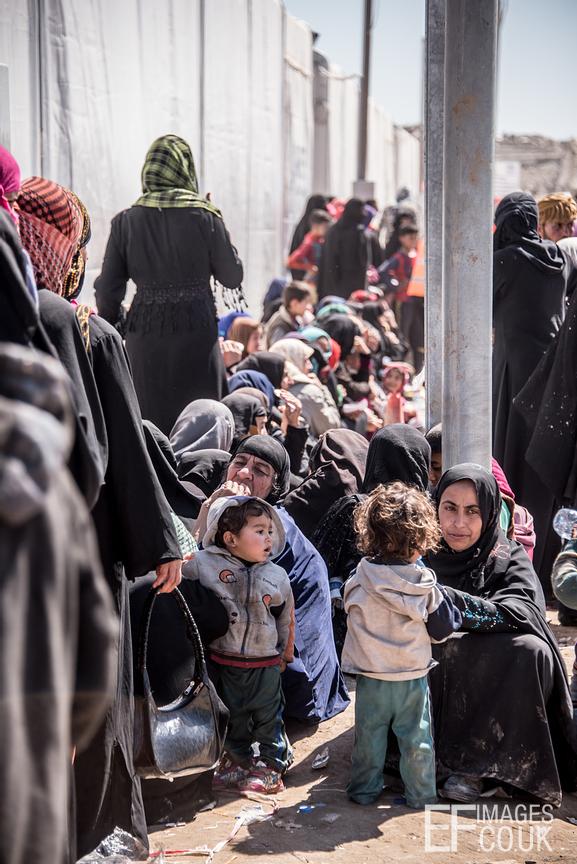 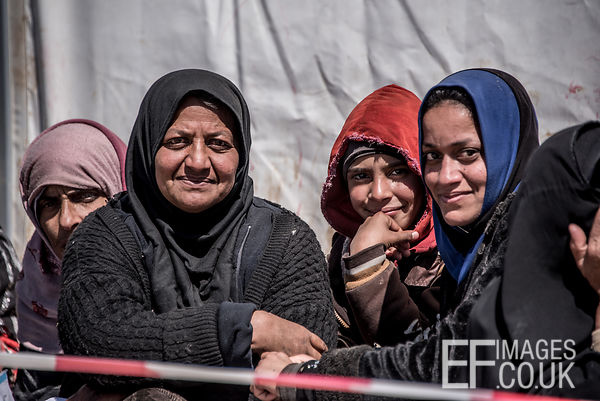 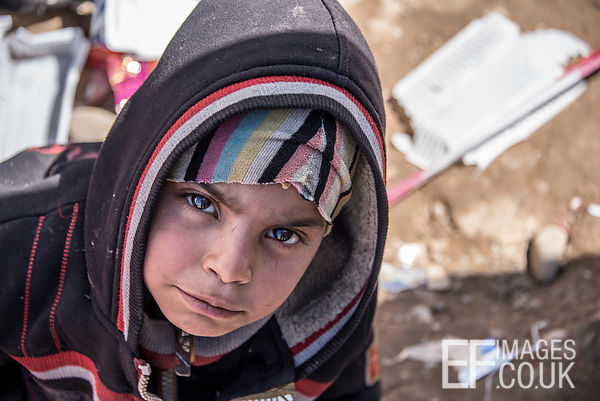 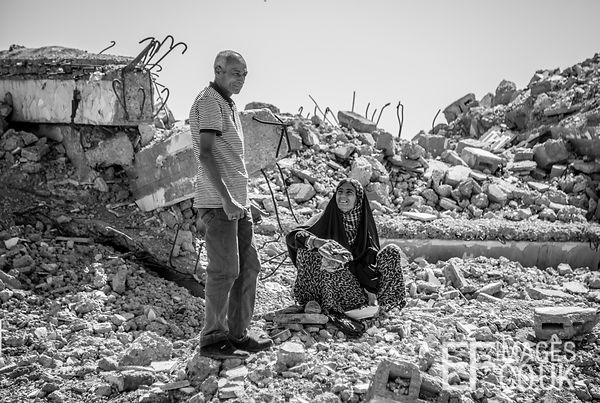 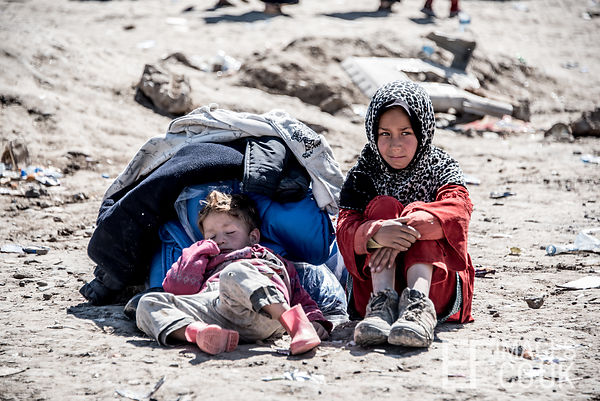 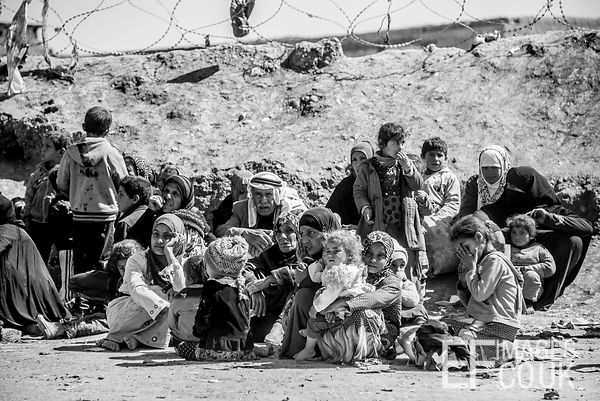 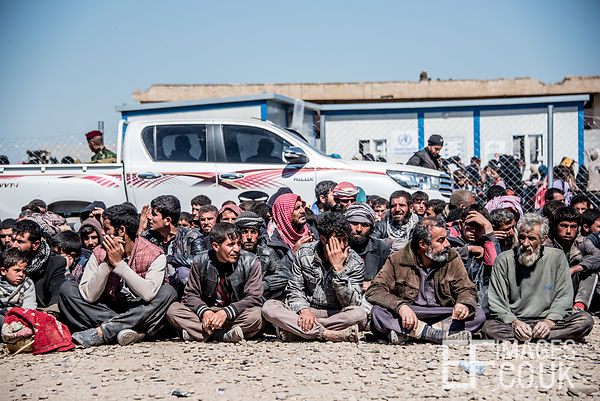 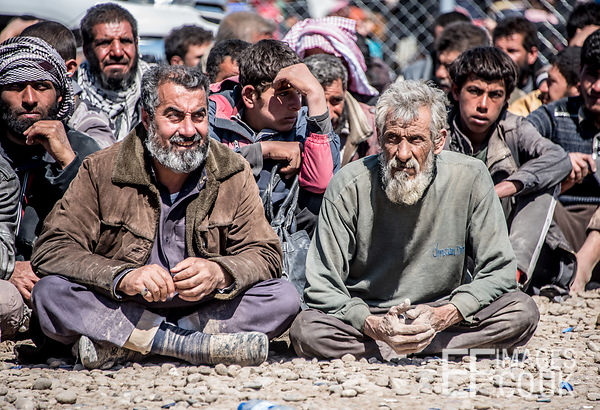 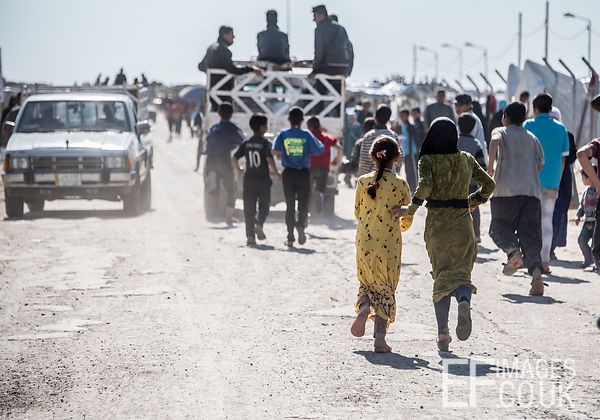 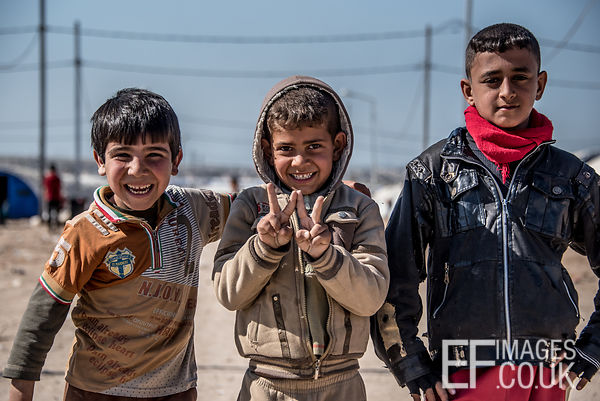 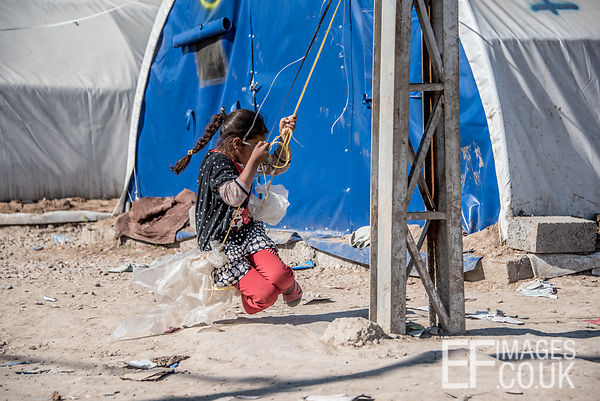 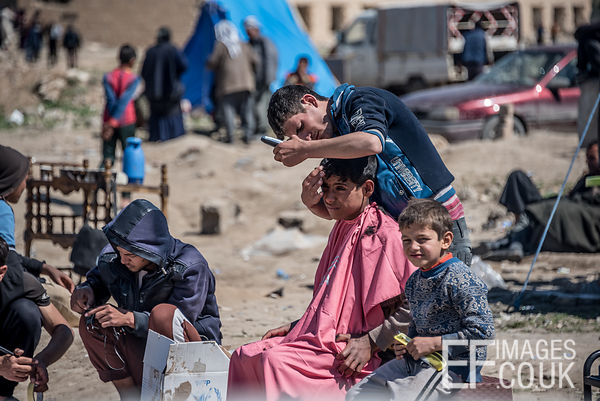 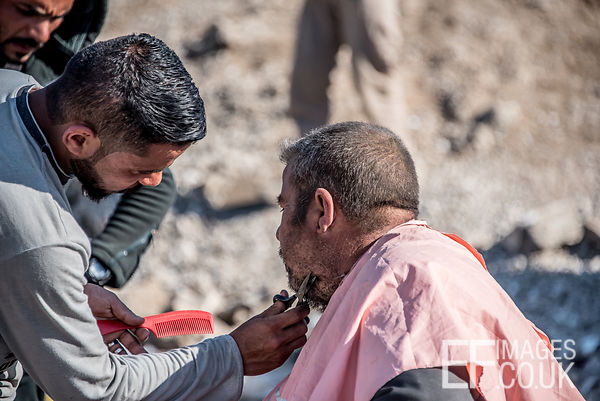 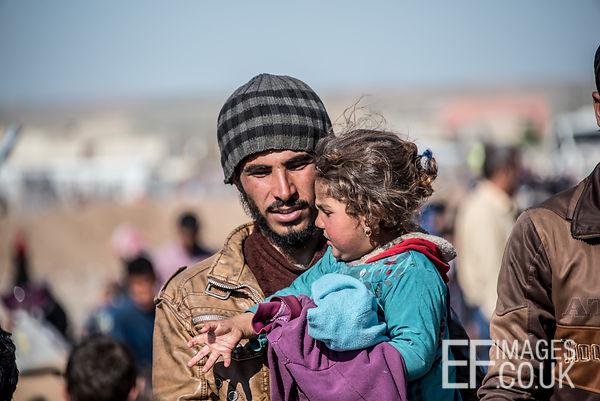 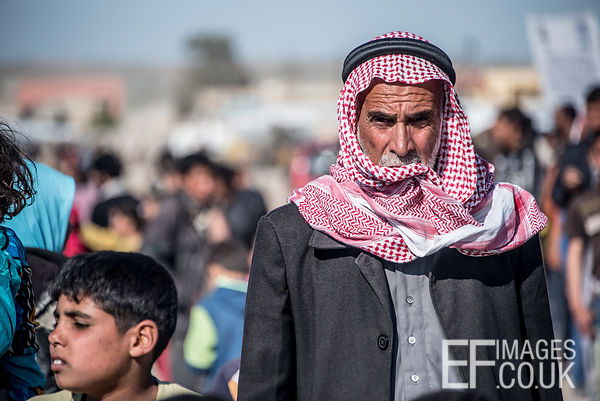 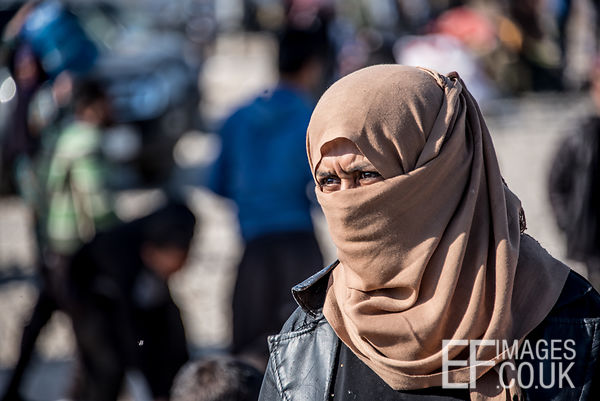 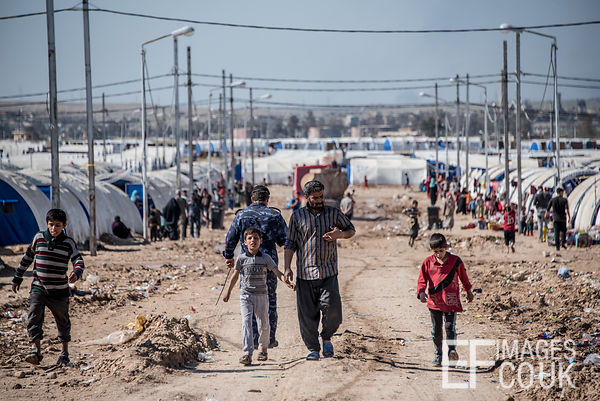 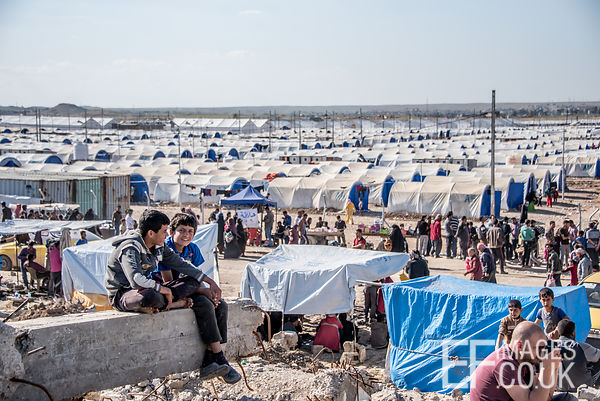